Join 1,990 other subscribers
Follow The Symbiont Factor Blog on WordPress.com 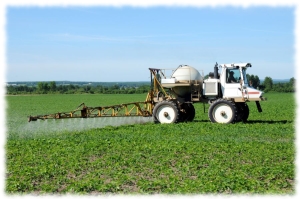 The Problem with RoundUp and its health effects
Sometimes during a debate it becomes obvious that one side is simply not telling the truth. Such seems to be the case when considering RoundUp, currently still promoted as the safest herbicide ever produced. It is also the most commonly used, with a recorded 187 million pounds used by US farmers in 2007. More current usage is not known, but estimated at over 200 million pounds in the US. The maker of RoundUp, Monsanto, continues to maintain that it is nontoxic and completely safe. This belief permeates to those who use it, with readers offering comments at the end of the article defending its safety. Most homeowners use RoundUp to control weeds, and most farmers use it liberally on crops. This is possible because of genetic modification of crops to permit resistance to glyphosate, permitting the killing of weeds without killing the crop. Recently articles have been published online suggesting that the problem with wheat causing celiac disease or gluten sensitivity has more to do with residual levels of glyphosate than with gluten content. The suggestion that pre-harvest spraying of crops with glyphosate to reduce weed content, promote dessication and improve yield is typically met with a hailstorm of accusations of “pseudoscience” and “fearmongering.” There are usually some vehement denials that pre-harvest spraying is ever carried out. An example of one such article can be found here: http://tinyurl.com/n9rtzpn

With this in mind let us consider two questions: Is glyphosate toxic, and are crops really sprayed prior to harvest?

The reason that glyphosate is “considered safe” is that it inhibits a metabolic pathway in plants known as the Shikimate pathway. This inhibition interrupts the plant’s metabolism and kills it. Humans and other eukaryotic species do not have a Shikimate pathway, and so the claim of safety appears to be scientifically sound…or is it? All eukaryotic organisms including humans have cellular power-producing structures known as mitochondria. These structures are where energy is produced so that the cell and the organism have fuel. Mitochondria, however, are really not of human origin. Thought to be the end result of ancient indwelling symbionts (endosymbiont theory if you’d like to look that up) mitochondria are more similar to bacteria than human cells. Their DNA is circular, just as bacterial DNA is circular. This isn’t some new discovery as geneticists have been using this mitochondrial DNA to track the human family tree for years. You see, mitochondrial DNA is matrilineal-it is only inherited from the mother, not from the father. This provides a unique opportunity to track one side of the family tree more accurately than is possible with human DNA. It’s also the first clue to glyphosate’s toxicity, as bacteria have a Shikimate pathway! Predictably mitochondria also have a Shikimate pathway. There is already a research paper stating this (Mesnage, Seneff). There is also an effect in the microbiome, as glyphosate is more toxic to some microorganisms than to others, causing an imbalance in this critical ecosystem. Kruger found that glyphosate reduced the inhibition of Clostridium (a pathogen) by Enterococcus species, causing imbalance and disease. A differential toxic effect was found in chickens by Shehata, who showed the glyphosate inibited beneficial microbial species yet did not inhibit pathogenic ones. Changes in gut bacteria in humans can alter serotonin levels, affecting behavior, mood and susceptibility to brain trauma (Morley). The microbiome living in our intestines are critical to our health and are vulnerable to changes in intestinal function (Matthews). It has been found that at very dilute concentrations, far less than commercial farming uses, glyphosate reduces intestinal motility (Chlopecka). This would result in more constipation, dramatic shifts in population dynamics and an increased risk of small intestinal bacterial overgrowth (SIBO) due to reduced motility allowing contents of the colon to move into the small intestine. Glyphosate has been found to trigger pathways producing cellular apoptosis (think cell sepuku) and increased reactive oxygen species producing damaging oxidation (Chaufan).
There is always someone who, in the comments following an article critical of Roundup, offers to drink a glass of it to prove its safety. This is ill advised, as glyphosate is far from nontoxic. Instead, it has been found to produce respiratory depression, bradycardia (so, you can’t breathe and your heart slows), acidosis, hyperkalemia, cardiac block or arrythmia and death. Hemodialysis and intubation are required to help the patient survive, as there is no antidote to glyphosate poisoning (Garlich, Gress).

You might notice that many of these organizations providing pre-harvest spraying guidelines are university agricultural programs. If you’re not familiar with ag programs, you might even wonder why they would recommend such a practice in light of the research information on glyphosate’s biologic effects (and there are many more articles showing its effects; I didn’t even scratch the surface really!). The old adage of “follow the money” could never be more accurate: http://tinyurl.com/mhyvwzy, http://tinyurl.com/ctw2aq7 as the codependent relationship that has evolved between Monsanto and institutes of higher education is both diabolically brilliant and nauseatingly common.

If you needed more reasons to shop for organically grown fruits and vegetables or use grains other than wheat, you now have them. If you think just avoiding wheat will solve the problem, consider that the same recommendations exist for barley, oats, flax, canola, peas, lentils, soybeans and dried beans (page 31 of http://tinyurl.com/q2o8f96 lists all of these as recommendations for pre-harvest spraying in Canada, and others list ‘small grains’ in the guidelines: http://tinyurl.com/o994mk2).

We have arrived at a time in history when the business interests of corporate entities often take precedence over the health needs of society’s human members. When we allow large corporations to control what is taught in schools and what guidelines are imposed by government, we can count on one thing-being counted out of the deal.