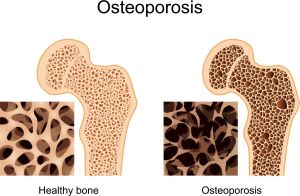 One of the more common problems that happens in many people as they get older is Osteoporosis. This condition results in less mineralization of bones, making the bones weak and at risk of fracture. While many may accept this as a result of the aging process, it is not normal. Bone is a dynamic tissue that is constantly being remodeled in accordance with lines of stress. This principle is named Wolff’s Law, named after Julius Wolff, a German surgeon from the 19th century. What happens is that calcium, phosphorus and other bony matrix minerals are deposited in the bone tissue along lines of physical stress and incorporated into bone by cells called osteoblasts. Bone minerals that are deemed no longer needed (for example, if a person rarely strays too far from the recliner) are resorbed by cells called osteoclasts. The balance of function between osteoblast and osteoclast determines if a person is gaining or losing bone density. Other factors such as availability of minerals such as calcium play a role too. Calcium is best absorbed in an acidic environment, and many people produce less stomach acid as they age. The intestinal microbiome plays a role also, as less stomach acidity results in a poor environment for the microbiome-that huge population of bacteria that live in the human intestine and keep us healthy. Hormones play a role, and reduced estrogen production from aging or surgery will also predispose a woman to osteoporosis. The microbiome affects the production of estrogens, particularly after menopause or in men. Thus, once again the microbiome helps prevent osteoporosis. There is a marked tendency for the aging person to have more difficulty in supporting sufficient bacterial species to accomplish these tasks. Additionally, the beneficial microbiome consumes plant and vegetable fiber, something that may be consumed less by people as they age due to poor dental health or a tendency to eat convenience foods that are low in fiber. These changes result in a reduced population of beneficial bacteria in the intestine. A reduced and imbalanced microbiome has been found to also result in osteoporosis because the microbiome communicates with the bones in what has been described as the gut-bone pathway. The microbiome’s influence on T-cells, in particular T-regulatory cells, also plays a role in the reduced resorption of bone. Conversely, the compete absence of a microbiome results in uncontrolled and abnormally increased bone deposition of minerals, showing that the microbiome in fact controls the bone density through modulation of hormonal and immune factors. It has been found that probiotic supplementation helps to prevent bone loss after the removal of ovaries-a common cause for low estrogen. Considering the many ways that the gut symbionts influence bone density, it is no surprise that adding some of the beneficial bacteria is good for bone density! This reaffirms the importance of maintaining healthy populations of symbiotic bacteria. The human body is not able to function normally without these microscopic symbiotic helpers!
References:
http://www.ncbi.nlm.nih.gov/pubmed/24677054
http://www.ncbi.nlm.nih.gov/pubmed/23259758
http://www.ncbi.nlm.nih.gov/pubmed/22407806